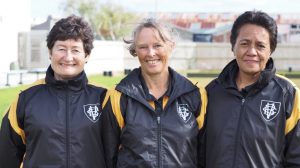 Congratulations to Robyn Rintoul, Sarah Taukamo and Helen King for winning the Wellington Champ of Champ Triples title at Naenae over the weekend. They had to battle hard to get to the final with a 14-13 win in their first match and they came back from 5 behind with 2 ends to play to force an extra end in the semifinal against Silverstream, but had the final all to themselves blowing away Wendy Mackie’s Naenae team 18-6 with 4 ends not played. This was Robyn’s 1st Wellington title, Sarah’s 2nd and Helen’s 27th!

Our men’s triple are also still in the hunt awaiting a semifinal against Hutt on Wednesday night 5.30pm at Naenae. The team of Mike Sood, Laurie Guy (a replacement for Richard Corry) and Jeremy Kydd also accounted for Naenae on their way to the semifinals.