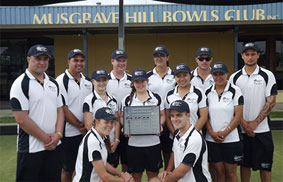 t of a successful Auckland Invitation Under 25 squad that narrowly beat Queensland Under 25 by 16 shots on aggregate last week. They played six tests (a seventh was washed out) in which each side won three tests each at the Musgrave Hill club near Brisbane. Nicole played a mixture of singles, skipping pairs and skipping triples for 3 wins and 3 losses and can be seen here holding the award.