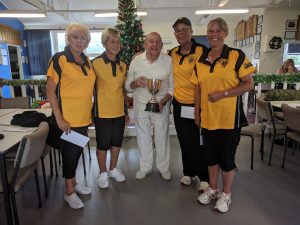 It was not quite the double we hoped for but the Wellington Xmas Open Fours was a success for Victoria teams with Nina De Munnik, Kay Carr, Helen King and Leigh Griffin winning the women’s event, and Richard Corry, Tim Toomey, Bradley Down and Ray Martin coming runner-up in the men’s event at Silverstream over the weekend.

The women’s team had run a comfortable through qualifying and the semifinal but were made to fight hard in the final against Val Fitzmaurice’s Petone Central team before winning 19-17. The Victoria team were ahead in all but one end but could not shake their opponents who took the game to the last end.

Of note this was Nina’s 5th Centre 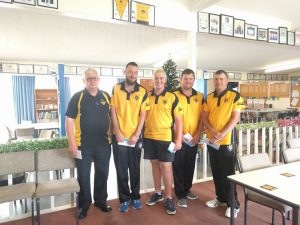 The men’s team had to do a lot of fighting throughout post-section coming from behind in both their first two knockout games before a more comfortable semifinal win. Unfortunately Wayne Jones’ Naenae team proved too tough to chase in the final beating Victoria 13-25. Jones also beat the other Victoria qualifiers Alf De Munnik, Roy Gibb, Barry O’Brien and Jeremy Kydd 12-16 in the first round.