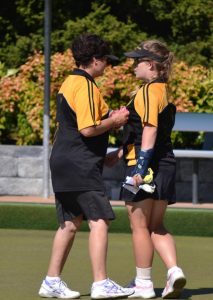 competition last week in Auckland. Our team of Helen King (singles), Sarah Taukamo and Leigh Griffin (pairs), and Robyn Rintoul, Nina De Munnik, Kay Carr and Nicole Toomey (fours) played well throughout comfortably winning their section and then coming through the toughest looking part of the playoff draw beating United (Nelson) in the quarterfinal and Burnside (Canterbury) in the semifinal. They came unstuck in the final against Hinuera (Waikato) but not before the four earned their eighth straight win to remain unbeaten throughout the competition!