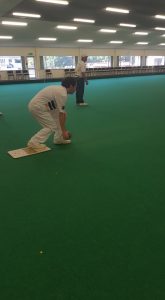 member Stephen Zino won a qualifier for the Scottish Singles in Professional Bowls Association action on Monday. Zino travelled to the Paritutu club in New Plymouth and looked stronger and stronger as the day got on to beat Taranaki’s Don Christensen in the final after starting the day by beating another former Victoria player Kevin Rice. Stephen will play in the PBA national finals in Dunedin in September. He has previously represented the NZ PBA at the Scottish Singles event in Perth, Scotland in 2013.