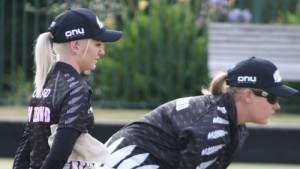 National coach Dave Edwards says the Blackjacks’ women bowlers are starting to give the selectors some pleasant headaches as they look to finalise their team for the November world championships.

Edwards said the selectors were “pretty delighted” with the women. “They got over the line to fly the flag and were the only team that did,” he said. “They really did deserve it, they probably dominated most of the way through for three days.” Griffin, 24, had a “fantastic debut” tournament, Edwards said.

“The key thing was we used five players each day but the two that sat on the bank obviously contributed [during the series] as well,” Edwards said. He predicted it would be “a really tough job” for the selectors to finalise the women’s world championship team which is set to be named in late April.

That dilemma was “to the total credit” of the seven players in the trans-Tasman squad. “We are really proud of them, they really well went.”

The Blackjacks’ younger brigade have carried the national women’s bowls team to a morale-boosting third test win over Australia. Twenty-somethings Mandy Boyd, Selina Goddard and Kirsten Griffin had two wins in the triples and two victories in the fours, with veteran Val Smith, as the Blackjacks trounced Australia 5-1 in Christchurch on Thursday.

The New Zealand Women won two tests to Australia’s one.

Griffin, 25, can reflect on an encouraging debut in the Blackjacks ranks on the Burnside Bowls Club greens where she won the national fours title in January.

The former Wellington junior who still retains membership with Victoria but now lives in Nelson, was a first test winner on debut on Tuesday, returned to the lineup after missing the second test defeat to the Australians.

New Zealand’s Jo Edwards and Smith, started the third test with a 17-14 win in the pairs and Goddard, Boyd and Griffin won the triples by the same score. The Kiwi four beat their counterparts 16-10 to give New Zealand a handy 3-1 lead, which they embellished with third round wins in the pairs, 19-15, and the triples by a convincing 20-19 margin.

Nelson bowler Kirsten Griffin celebrated her Blackjacks debut by helping the New Zealand women to a test win over Australia.

The Kiwis came back from a 3-1 deficit to win their pairs and triples final round matches in Christchurch on Tuesday to square the tie at 3-3. But the Blackjacks won the test on points differential at the Burnside Bowls Club.

Mandy Boyd skipped the women’s triples with Selina Goddard and debutant Griffin. Goddard, Griffin, Smith and Boyd were selected in the women’s four.