Victoria became the first club in the history of the Wellington Fours to win both the men’s and women’s titles in the same year. There has been a Wellington Fours events for both genders since 1948.

For the women it was an awesome Victoria vs Victoria final with the winners Leigh Griffin, Helen King, Kay Carr, and Nina De Munnik over Sarah Taukamo, Yvonne Gibb, Sharman Buckle, and Robyn Rintoul. Well done ladies, amazing to have both teams in the final.

The men’s final was won by Lou Newman, Andrew Curtain, Laurie Guy, and Gary Ruane who won over the Stokes Valley team that included former member Bradley Down. Early on Victoria were down 11-2, with the Stokes Valley skip Finbar playing some great bowls. Victoria fought back though, winning the next 6 ends and it stayed tight right until the end where it was 17-17 all after 18 ends, forcing an extra end. In the extra end, with Victoria down on the head, Lou killed it, forcing the extra end to be replayed. Then with Victoria down in the extra end again, Lou with the last bowl of the match, he drew it dead for the win! Champions!

Victoria did also have on the men’s side a team in the semi-final that lost which would’ve made it an unheard of double double final, but Ray Martin, Tim Toomey, Chris Nugent, Mark Burgess went down in the semi-final to the Stokes Valley team.

The men’s pathway to victory:

The women’s pathway to victory: 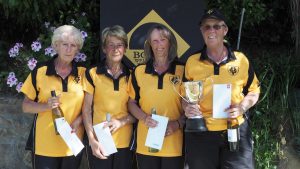 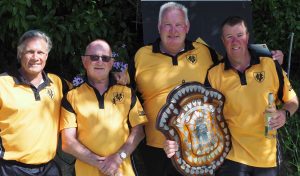 Video of the last 40 minutes of the match is available via this link: