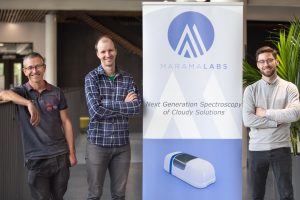 Having spent the last 12 months under the wing of a Viclink ‘technology business unit’ (TBU)—to help ease their transition to a fully-fledged business—the inventors say that “the training wheels are off now.”

“The technology is at a point now where its commercial viability is ready to be fully proven,” says Chief Technical Officer Dr Matthias Meyer, who co-founded MaramaLabs with Chief Executive Officer and Victoria Bowling Club 1st year player Dr Brendan Darby. Viclink’s TBU structure allowed the co-founders to focus on key product development for their CloudSpec instrument while ramping up their commercial activities with the wine industry—without the complexities of running a business day-to-day. “This extra runway has proven crucial for us not only in developing our product but also in enhancing the MaramaLabs brand within the New Zealand and Australian wine industry,” says Brendan. “Our relationships with key industry leaders played a critical role in attracting investment.”

The scientists, who are based at the University’s School of Chemical and Physical Sciences, were experimenting in the lab when they discovered a new and simpler way to analyse ‘cloudy’ solutions. As a result, they developed the first MaramaLabs product—CloudSpec—a novel spectroscopy instrument that enables opaque and cloudy liquids to be analysed more quickly and accurately than traditional spectroscopy methods.

Viclink Commercialisation Manager Ashwath Sundaresan says that while there is clear market potential for CloudSpec in a range of industries—including quality assurance for wine, beer, dairy and environmental testing—development had reached a turning point.

“Start-ups that commercialise complex intellectual property are often capital-hungry, and require substantial up-front investment in order to develop their products and businesses.

Ashwath says that WNT Ventures has provided MaramaLabs with that additional capital—through a combination of their own investment funds and $450,000 via Callaghan Innovation’s Repayable Loan Scheme—to help the company build towards sustainable revenues. “They’re also providing the support that pre-revenue, innovative technologies and companies need to grow into successful businesses,” says Ashwath. Alongside this investment, MaramaLabs has been able to access further capital via the recently announced Booster-Viclink partnership.

Brendan says that forming the company and completing the capital raise will enable them to accelerate their business, and start shifting focus away from the tech itself and onto how to sell and distribute the product instead. “Our goal now is to have a commercially viable product on the market in 2019.”

And while MaramaLabs is already working with two major wineries in New Zealand and Australia, Brendan says the new investment means they can start employing the key operational skills and expertise they need to grow a globally competitive hi-tech business. With the wine industry on the initial horizon, the MaramaLabs vision is for its technologies to be adopted across the food and beverage industries and further afield to environmental and wastewater testing.

“We are hugely grateful for the opportunity that university-led research has given us,” says Brendan. “We’ve been able to incubate our tech here at the University and get it to an investor-ready stage thanks to organisations like Viclink, who are so knowledgeable about the intricacies involved in commercialisation, and KiwiNet, who funded our early-stage research.”

The MaramaLabs team will continue to work from Victoria University of Wellington for the time being, and manufacture the CloudSpec product in Wellington using local engineering expertise.

“It’s great to think that we’ve not only been able to create our own jobs out of this tech, but that we could potentially be creating jobs for others as well,” Matthias says.