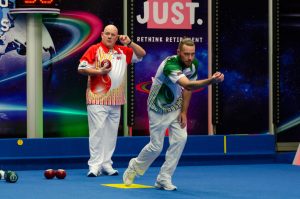 Ray Martin came up against a rampant six time world indoor champion Alex Marshall in the first set of their World Indoor Singles first round clash at the Potter’s Leisure Resort in Norfolk, England with the Scot cleaning out Ray 11-2. However, the kiwi showed his potential climbing back into the match in the second set. A two on the fifth end gave him a 5-3 advantage, and another two on the eighth end looked to have assured a tiebreak at 8-4 going into the last end. A loose end from the kiwi gave Marshall a chance of a four but he was uncharacteristically heavy with his last to throw the game to a deciding best-of-three end conclusion. Ray was again loose with his opening bowls but was close to snatching both the first two ends losing an umpire’s measure then slicing the jack to a Marshall bowl with his last.