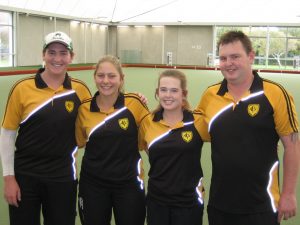 Congratulations to sibling combinations Amber Down and Nicole Toomey, and Tim Toomey and Bradley Down for winning their respective Wellington Champ of Champ Pairs competitions yesterday on the indoor green at Naenae. Tim and Bradley were in a tight final against Jimmy Madden and Scott Roddick (Eastbourne) at 7-8 down after 10 of the 18 ends but then surged away with a 5, 4 and 6 on the next three ends to eventually win 24-9.

Amber and Nicole had to fight hard against Wellington Easter Pairs champions Kaaren Guilford and Dale Rayner (Johnsonville) with Nicole in particular putting in a brilliant performance. Amber came on strong in the decisive ends including a crucial 4 on the 14th end that swung the game towards the Victoria pair.

The probably unprecedented brothers and sisters act putting icing on the cake for a season which has probably given Victoria the Wellington Mens Club of the Year award, and has pushed the women up to third behind Johnsonville and Naenae.