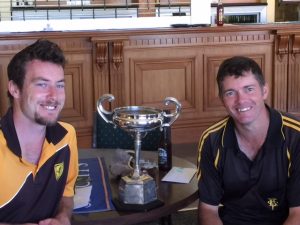 Victoria had a fantastic Wellington Open Singles with several players featuring in post-section play. Richard Corry picked up his gold star with a 5th Wellington title beating Ray Martin in the final. Ray had earlier accounted for Laurie Guy, while Rich beat former Victoria player Neil Barron (Hawkes Bay) in the other semifinal.

And Victoria had two in the women’s semifinals with Nicole Toomey going down to Kaaren Guilford (Johsonville) and Robyn Rintoul losing to Kimberley Hemmingway (Naenae).

The men are now in first place in our unofficial Wellington club of the year points.