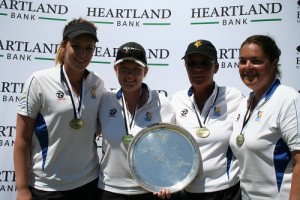 Blackjack Mandy Boyd has led her team to a brilliant comeback victory in the national women’s fours final in Christchurch.

Boyd’s team only took the lead at the the 15th end and clinched the title with four shots on the 17th, leaving Edwards an impossible task on the final end after  a three hour 50 minute battle.

It was the Boyds’ second title of the tournament after retaining their pairs crown in Monday beating Kirsten and Leigh in the final.

And Leigh picked up the consistency award as best Woman at the Nationals for the second year in a row!

The women’s final between teams skipped by Blackjacks Jo Edwards and Mandy Boyd was tied at 13-13 after 14 ends.

The Edwards team were too strong for their semifinal opponents, winning 22-9 against a composite four comprising three Victoria clubmates Nicole Toomey (skip), Sarah Taukamo and Robyn Rintoul and the Wanganui centre’s bowler of the year, Dianne Patterson.

Boyd’s four also had a convincing 22-12 victory over Alison Rennie’s Auckland four to book their place in the final.

On Wednesday, Nicole Toomey gained the point on the extra end to beat Carolyn Crawford (Dunedin) 14-13 in the quarterfinals. It was a tight game and Toomey took the lead for the first time on the 15th end. Crawford trailed by three shots after 16 of the 18 ends but drew level by scoring three shots on the last two ends.