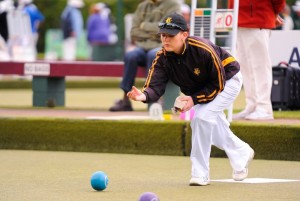 Kirsten Griffin is the Women`s Singles Champion at The Trusts NZ Open 2012 after picking 3 of the head and finishing 21-13 ahead of Stratford!! A fantastic final`s match as Griffin showed she has truly come of age.

Another single to Griffin, 18-13 after eighteen ends.

Young Griffin edges closer to the title with another 2 on the 17th end, 17-13 ahead.

Stratford evens the score on 13 after 15 ends.

Griffin back in the lead after picking up 2 with some superb draw shots, 13-11 to the Wellingtonian.

Back and forth, Griffin isn`t letting Stratford get away on her. Griffin picks up 2 on the 13th end, 11-12 behind Stratford.

Stratford earns a single, 12-9 over Griffin now, twelve ends down.

The end is killed with panache by Griffin for the replay.

A single to Stratford, 10-9 over Griffin in the tenth end.

Griffin`s answering winning streak puts the two bowlers even on 9 after nine ends.

Two for Griffin closes the gap again, 7-9 just behind Stratford with eight ends down.

Griffin fights back and picks up a single, 5-9 behind Stratford now, seven ends rolled.

Three winning ends in a row has widened the gap between Stratford and Griffin, 9-4 to Stratford after six ends.

Using her run shot with surgical precision, Stratford picks up 3 on the fifth end, leading 8-4 now.

Griffin draws another cracker, holding one, but Stratford returns fire with her own sublime roll, picking up 2 and taking the lead, 5-4 after four ends.

Griffin draws a stunner and picks up 2 on the third end, despite Stratford`s drive, 4-3 to Griffin.

Stratford responds with 3 on the second end, 3-2 to the Auckland bowler.