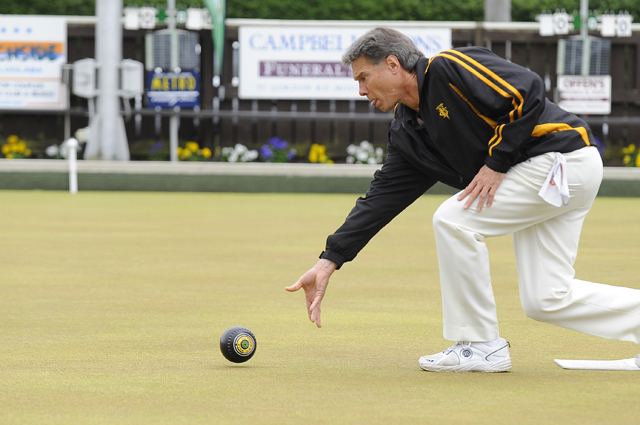 Not one to indulge in cliches, it was near impossible to avoid this most worn of biblical references as the world’s number four Singles bowler Ali Forsyth was felled by the cool head and talented hands of 20-year-old Raymond Martin (Victoria Bowling Club, Wellington). A ninth season “veteran” of the game, Martin has been around and played some great bowlers, by his own admission. But this latest victory is that much more impressive because it is Forsyth’s speciality, the Singles that is.

So where did this young player come from? He is certainly no rookie, having played Centre matches, entered and qualified at the Nationals last year, rolled for the NZ Under-25 team, reached second place in this year’s Kittyhawks Singles event and rubbed shoulders, not to mention bowled against, NZ’s bowling elite at the recent Challenge Trophy event. But it does take a certain skill and mental fortitude to tangle with a player like Forsyth. After all, he’s played the best in the world and come out on top.

By the time I arrived at the St Kilda Bowling Club, the game had reached a level of tensely epic proportions as both players vied for control. At 17-15 to Martin, the frustration was evident on Forsyth’s face. He needed to win the match to qualify, while Martin had already dispatched the rest of the competition in the section and was assured a place on Sunday’s greens.

“All the pressure was on him,” Martin says with calm assurance, “I’d already qualified, and he’s got the name to live up to, so I just went out and played my bowls.”

Blasting a drive down the green, Martin plucked one bowl from the head, but left Forsyth smiling as the score was even now on 17. The next end saw Forsyth flick out the jack, but keep a point for himself. It was 18-17 to Forsyth and the end was in sight for one of the bowlers.

With practiced patience, certainly helped by his experiences in the High Performance Programme, Martin drew three, then four bowls around the jack; leaving Forsyth to break it up. Falling short at the end, the Black Jack magic seen on international greens had departed for the day. Leaving a pleased, confident and ambitious young bowler in control, with four bowls that pushed Ali Forsyth out of Singles contention (21-18) and Martin that much closer to his goal of representing NZ again.

“I’m hoping to make it back into the Under-25 NZ team again, it’s a big goal for me. And I’ll try and win a national title in the next few days,” Martin says evenly, “I’ve got just as much of a chance as anyone else.” 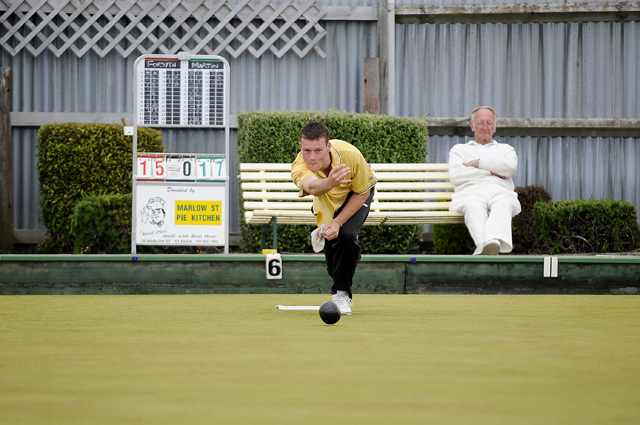 This interest story appeared in the Otago Daily Times on Leigh and Kirsten Griffin:

It is different today. Young women are welcomed by bowling clubs. But it was not the case when Leigh Griffin started almost 25 years ago.

It was the bad old days when Leigh first wanted to join the Titahi Bay Club as a 21-year-old.

“I had to wait three years,” Leigh said. “Young women were not encouraged to join bowling clubs in those days.

“The women didn’t like it and said I was too young. They wanted to restrict the number of women in the club. But the men wanted to open it up.”

Some of the older women who controlled bowling clubs wanted to keep it as a closed shop and made it difficult for younger women to play bowls.

It was not only the draconian dress code but also the decision to play centre championships during the week. This stopped working women from joining the sport.

Since the amalgamation of men’s and women’s bowls with the formation of Bowls New Zealand in 1996 there have been big changes in the sport that are now starting to bring positive results.

“The sport has now come out of the dark ages,” Leigh said. “The older women were too antiquated in their attitudes.”

Leigh Griffin (44), a Wellington court registrar, led the change at the grassroots level by encouraging her daughter Kirsten to play bowls.

Kirsten (19), who also works as a court registrar in Wellington, was introduced to bowls at a young age, when she was taken to the green in her pram to watch her mother in action.

“Kirsten has watched bowls all her life,” Leigh said.

“She started having roll-ups at the club from a young age.

“Kirsten loved bowls from the start and wanted to join the club at the age of 10. But I held her back. She was a bit too young then,” Leigh said.

Kirsten joined the Victoria Bowling Club in Wellington as a 13-year-old in her first year at St Mary’s College and typifies the teenage influx into the game.

Mother and daughter have played together for the last five years and played in their first national championship together in 2006 and reached the second round of post-section play in the pairs on Sunday.

“We are the best of mates and play together all the time,” Kirsten said. “We get on well and know each other so well.”

Bowls has become an important part of their life.

“I love it,” Leigh said. “It is a mentally challenging game and is a big part of my life.”

Kirsten enjoys the friendliness of the people she meets when playing bowls.

“It is challenging playing outdoors in all sorts of weather, especially in Wellington,” she said.

Leigh went to all the bowls tournaments her daughter played in while at secondary school and got to know all the teenage bowlers.

“They all called me Mum,” she said. “We are the best of friends.”

Leigh has been playing bowls for 25 years and has won 20 Wellington centre titles. She has represented the province for the last 14 years. Former international Judy Howat holds the record with 32 titles.

Kirsten is in her sixth year of bowls and has already won two Wellington centre open titles and the New Zealand under-20 singles in 2009. She represented New Zealand in the under-19 transtasman series in 2007 and 2010.

Her goal is to emulate Commonwealth Games and World Bowls gold medallist Jo Edwards, who is the player she looks up to in bowls.

Comment from Laurie (sorry, there seems to be a problem with Comments):

“I’d just like to confirm to anyone that is interested that, that isn’t my usual delivery!!!!!! ie. I don’t bowl with my tongue stuck out, I don’t dump my bowl and I don’t look at the ground several feet in front of me. At least I’m pretty sure I don’t????

I’m pretty confident I can pick the exact bowl when the photo was taken. It was in the quarter final of the singles at the Nationals against Paul Girdler, I was down 14-9 at the time and 4 down on the head.

The delivery was a run/drive, hence the space between the bowl and the ground. It missed everything and I dropped a 4 to go 18- 9 down. Hence the tongue action.”